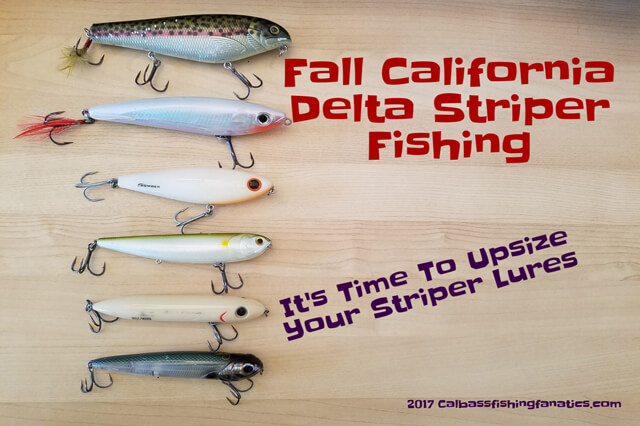 “Oh it’s on NOW! Fall California Delta Striper fishing is ramping up every day.  It’s time to get you some.  Believe me when I say things are rampning up because by myself I have caught over 180 Striped Bass in the past 3 weeks.

From the SHORELINE with Artifical lures only . . .

Initially the Stripers were mostly schoolie sized shakers then 2 weeks ago the bigger Stripers began moving up higher in the water column.  With the Fall season kicking in, the weather and the nights getting longer the Striper bite will only grow stronger.

The early Spring baitfish have grown up quite a bit since the Spring and early Summer spawns.  Which means the Stripers are now eating bigger bait fish and bigger lures.  You should adjust your lures accordingly.  That does not mean you should completely abandon your 3 or 4” lures just know that the bigger lures are gonna get hit more often now.

Delta Stripers are gonna be feeding heavily for the next months on lures like:

Keep track of the tides both incoming and outgoing because the Stripers will be active during both tides.  Stripers like the so find that bait fish, underwater weeds and it’s game on.

But, don’t hesitate to downsize or change lure colors.  Let the fish tell you what they want to eat.

I have caught some pretty good sized Stripers on 3 and 4″ lures when the Stripers were ignoring the big lures on certain days.

Either way just get out there and go get you some Fall California Delta Striper fishing action.